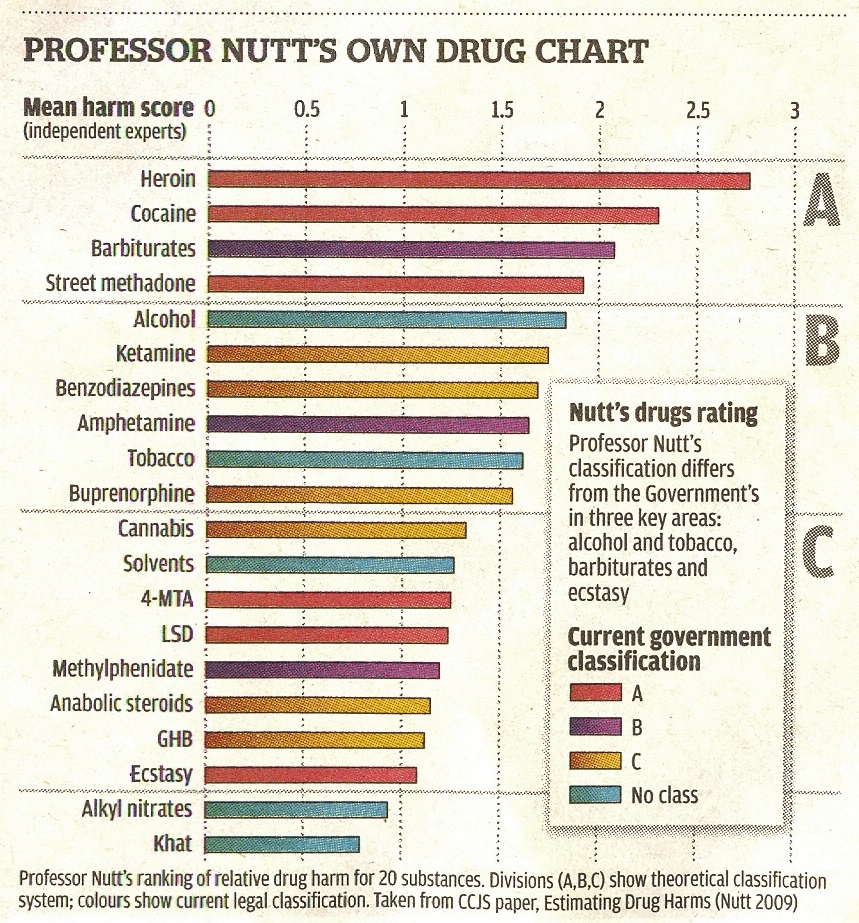 The relative harm of drugs is an argument which got Professor Nutt into trouble and I am not about to wage a scientific argument with him on this particular subject; however I will argue the point on the principle of government scientists dictating policy and on the proposal that some drugs should effectively sold under licence.

It is the constant comparisons with controlled drugs and alcohol which I find difficult to stomach. We know alcohol is a drug and a dangerous one at that, but you don’t solve a problem by undermining one danger because a greater one exists.

The classification system is there to deal with controlled drugs at this time alcohol and tobacco fall outside of this classification. If there is an argument to include these then make that argument, do not confuse it with an argument surrounding the harm from Methedrone.

The solution to the drug problem (if there could ever be one) lies in more than scientific data and opinion and it is here where I take issue with Professor Nutt. I would never question his integrity, his qualification or experience, however the issue with drugs is a political one. I should clarify that when I say it is a political problem it is not a problem to play politics with…

If the argument goes that the harm from alcohol is so great that it should be controlled, how could decriminalising other harmful drugs (even if they are less harmful than alcohol) help the situation in the UK, surely it can only make things worse?

One thing I wholeheartedly agree with is the formation of a new category of drugs; the Class X drugs if you like. It is a classification into which new drugs which appear on the market can quickly and easily be put, in order to avoid the uncontrolled legal ‘dealing’ of drugs.

What always surprises me is the difference between the vigorous, lengthy and expensive development and testing which pharmaceutical drugs undergo before they are allowed to be sold, which is in complete contrast to the back-street labs producing chemical compounds which are ‘developed’ by amateur chemists to fulfil this grey market for ‘legal’ drugs. It strikes me these go through less testing then even our foodstuffs which are subject to tough hygiene regulation.

The law in this grey area is very haphazard and a Class X would place some controls on the ‘legal’ drug trade and allow government scientists to test them properly; avoiding the current backward methodology of ‘see the harm they cause’ and then test and classify. This antiquated methodology provides no protection to young people attracted to these cheap and readily available drugs.

Professor Nutt’s drug chart is a reflection of his expert opinion in this area and with his experience he cannot be ignored. But the consequences of drug use are more than medical and scientific; the social, criminal and psychological consequences of drug use and drug dealing will always be a choice for politicians. Scientific grading alone is never going to be the only concern, the harm from drugs comes in too many forms.