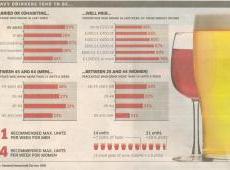 Undoubtedly with 6769 deaths linked to alcohol in 2008, there are still serious problems with alcohol abuse which we need to continue to fight against.

To identify today’s alcohol related issues and those of tomorrow we have to look at a different set of figures and examine the source of the problem more closely.

For example I think many people would be surprised to know that manual workers (men - 64%; women - 46%) were less likely to have consumed alcohol in the previous week than ‘middle class professionals’ (men – 79%; women - 67%).

It is also great news that the percentage of young people (11 - 15 years of age) who have tried alcohol has decreased; 39% in 2003 compared with 48% in this latest survey. The fact that many more young people in the North-east have tired alcohol as opposed to London, I would suspect has as much to do with the ethnic break-down of the two regions, as the so-called North-South divide.

Binge drinking is still a problem with the definition of 3 times or more the recommended daily allowance in a single day (i.e. 9 units for men; 6 units for women) meaning that 1 in 5 men binge at least once a week and 1 in 10 women do the same.

Sometimes the messages we send out should be positive ones, there is progress being made. As much as we have to warn people of the dangers of alcohol, we also have to shout about the successes from the rooftops. People don’t want to be preached at 24/7 it is not always effective, sometimes they want to be part of a success story.